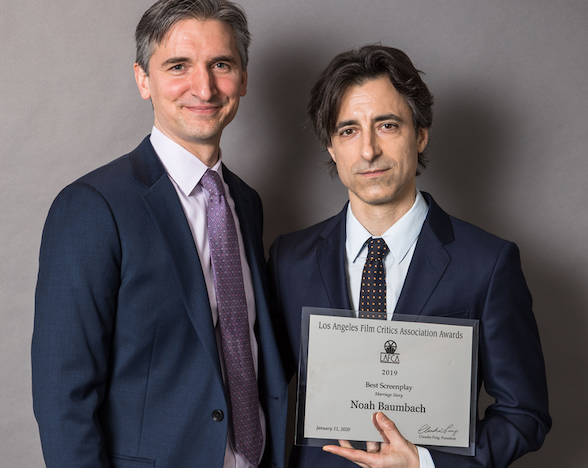 On Saturday at the InterContinental in Century City, the Los Angeles Film Critics Association held our 45th annual awards banquet. (Our full list of winners is here.) I was honored to present our Best Screenplay prize to Noah Baumbach for Marriage Story. Here's what I said from the stage:


What happens to love when a relationship ends? Does it wither away and die? Or can it evolve into something else?

Those questions are at the heart of Noah Baumbach’s wonderful, wry screenplay about the complexity and anguish of divorce. Yet his movie is called Marriage Story because, even though the main characters, Charlie and Nicole, are splitting up, they aren’t entirely going their separate ways. Because they have a child, their relationship is simply changing — they’re no longer man and wife, but they have to figure out how to still be a family.

Baumbach has always been a sharp, sometimes caustic writer, but in Marriage Story there’s also an incredible amount of compassion and tenderness — alongside some really terrific jokes about Los Angeles. This film does not take sides in its depiction of Charlie and Nicole — we care about both of them, but understand why they don’t fit together anymore.

If the story has a villain, it’s the divorce-industrial complex itself — the lawyers and legal mechanisms that can tear up lives and turn former soul mates against one another, convincing them that they’re better off alone. It’s a miracle anyone gets through that process in one piece. And so we worry about Charlie and Nicole: Amidst the custody battles and screaming matches, can they somehow hold onto what first bonded them so long ago?

An epic of intimacy, Marriage Story pinpoints the small acts of kindness, the nagging insecurities and failures, the flashes of joy and sorrow that make up a relationship — the things we share with another person, even after they’ve moved on. It’s a film about the end of love — and the echoes of love that still linger. It’s very funny but it’s also very bittersweet. It is a movie about marriage, but it’s also a movie about being alive.

"They'll catch the Sondheim reference at the end," Susan assured me. "Don't worry." She was right. Very happy to have Baumbach and Greta Gerwig at our banquet. She accepted our Career Achievement prize for Elaine May, who was unable to attend.

(Photo by Matt Harbicht.)
Posted by Tim Grierson at 12:12 PM